Do any of Orson's siblings know how to properly kill a mouse? We're convinced Shorty never taught Orson that, so while he's an amazing hunter, he never gets past the "I've caught it, now what?" bit...

Laura and I have instituted a "kibble for mice" program, where we take his (still living) mouse away and give him an extra meal. Usually he totally forgets about the mouse and runs when he hears the food.

The only downside is that now *we* have to kill the mice.

Yeah, that's life with Orson. The jerk meows and licks and even drags his claws across my nose. I used to try burying my head under the blankets, but then he figured out he could still get me up by laying on top of the blankets over my head and smothering me.

(In case the image breaks, this link should keep working.)

In other news, Orson is enjoying living near the woods, even though we aren't letting him out yet. He's become an avid bird-watcher and enjoys the semi-regular intrusions by mice and other smaller things into the house.

How's the rest of the clan doing?

For my management class I had to write a fake business memo. The first thing that came to mind was a memo to Boris. After writing it I emailed the prof asking if it was appropriate for the assignment. It isn't (good thing I have an idea for another one), but it came out so well, I thought I would share it with y'all.

Edit: I wrote the serious memo, and then decided to include both of them in the e-Portfolio

Recently, the cats have been acting a tiny bit weird around our house. I often come into the kitchen to find them staring at the pantry door. If I open the pantry, they rush in and stare at the back corner of the closet (NOT the food). I had started to suspect we might have a mouse.

Tonight that was confirmed.

I was in the living room playing video games, when I suddenly heard skittering and squeaking and banging in the kitchen. When I came into the kitchen, I find Orson breathing heavy and staring at a hole in the cupboard next to the dishwasher. He hasn't left that spot in the past 15 minutes.

Orson has seen his first mouse and he is ecstatic. I don't know about the rest of the family, but Orson plays faster and with better aim than any cat I've ever seen. IMHO, he's a natural mouser and it won't be too long before he catches it. We're going to have to set up some mousetraps in places the mouse might be getting to that the cats can't get to, but I'm kind of hoping Orson kills it first. (Now we just have to worry about him bringing us a half dead mouse in the middle of the night as a gift...)

On the other hand, Toti couldn't care less. He was laying in the living room listening to the whole ruckus and looking at me as if to complain that all that noise was interrupting his nap.

Update: As of about 11:25 just after I finished this post, there was a another quick scuffle in the kitchen and Orson came around the corner proudly carrying the mouse. I sat there for a moment going, "Awesome! Wait... Is it dead? I don't have anything to put it in right now..."

Then Orson dropped it and it ran back into the corner and he lost it.

He's on stakeout again. Meanwhile, I need to figure out what to do with it if he brings it to me again, alive or dead or wounded.

I would just like to announce that during his annual check-up, Boris weighed in at 15lbs, 8oz! That's a 5lbs loss in a year. He is now at his target weight.

Boris can has cheezburger on

Well, I knew he was loosing weight...but looking at a before and after picture... For more images of Boris, check out this little photo album I made: 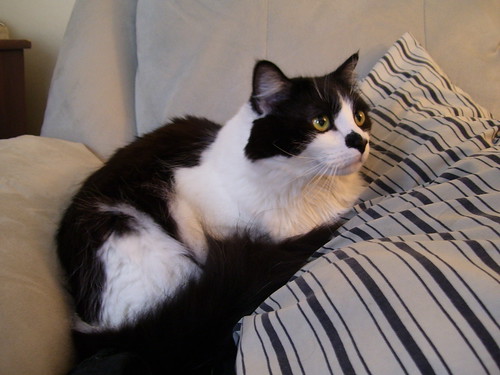 This morning I was woken up abruptly by a single claw being dragged lightly across my arm, very delicately as not to break skin. It seemed that Natasha, the princess, was hungry and demanded that I wake up and feed her. Of course, I had to abide by her wishes, for she would not let me sleep further, as she proceeded to head-butt my hand.

It's funny because usually if we sleep late, it's Boris who jumps on the bed and starts licking our arms or hands to feed him. But it seems this morning the princess was more hungry than the fat-ass.

What a relief to know that he can actually loose weight.